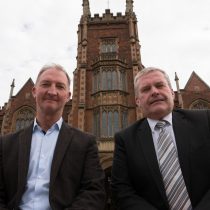 A Bangor company is working to solve a very grave problem in Northern Ireland’s cemeteries.

The pollution is caused largely by embalming fluids, including formaldehyde which is rated as a class one carcinogenic toxin.

Now the company has developed a ‘cushion’ which can be placed in the bottom of the coffin or the grave to neutralise the toxins before they enter the groundwater.

This article was written by greenacre