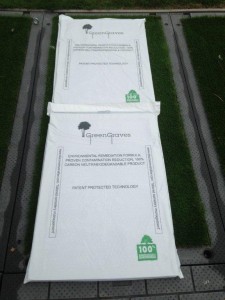 Little is known about the continuous damage being caused to the environment (primarily soil, groundwater, surface water and air) due to the decomposition of human remains after burial. It is accepted that the time taken for a body to completely decompose is approx 10 – 12 years and this will vary according to the soil type e.g. a porous, sandy gravel or loose soil, will encourage a faster rate of decomposition than that of clay, peat or similar soil.

It is also accepted that the rate at which the contaminants leech into the ground is around 50% of the corpses present quantity in the first year. Therefore in the short term period the risk is much higher than after a 12 year period when the leeching of hazardous material is only 4.2%, which is negligible.

Environmental Agencies (whilst adhering to the Water Resources Act 1991 along with Planners and various associated bodies within the Local Councils etc.) do their best to ensure that the risk of contaminants polluting our groundwater (thus polluting our drinking water) is kept to a minimum. This has lead to the rigorous evaluation and extensive planning criteria for proposed cemetery sites. Included in the evaluation are rules which govern distances from rivers and ground water storage and 12-18 month soil and ground water testing.

The EC Groundwater Directives (80/68/EEC), which incorporates the Policy of Practice for the Protection of Groundwater 1998, have been in practice in UK Legislation since April 1999. This gives the Environmental Agency power to prevent and control all activities associated with reducing the environmental impact of cemeteries and problems that may arise from similar sites.

As the contaminants break down naturally in the ground, (which is mainly determined by the type of soil, amount of rain fall etc) it is practically impossible to ensure that the groundwater won’t be polluted by harmful pathogens in the future. Existing cemeteries with free draining ground and a shallow water table face a major issue. The risk of groundwater pollution is higher when there is less absorption of contaminants from decaying corpses, and less filtration through less porous soils. This increased risk is due to pollutants accumulating in pools of trapped groundwater. It should be highlighted that a cemetery is legislated to a land fill site in that it results in similar contaminates coming from the waste material.

Current legislation states cemeteries and land fill sites are lined to ensure that contaminants don’t make their way into the groundwater along with safeguards being used to remedy potential odour emissions and surface water problems. Unfortunately this is not applied in the majority of existing cemeteries thus exposing the environment and our natural drinking water source to the now known carcinogenic Formaldehyde pollution.

G.A.P. (Groundwater Action Programme) The objective of G.A.P. is to protect all groundwater in the UK. Their list incorporates Cemeteries and Animal Burial Sites.

It should be highlighted that pollutants from decomposing bodies do make their way into the soil within a grave. Therefore Grave Diggers are exposed to the harmful substances each time they actively open a grave. These substances include: Formaldehyde, Chlorides, Sulphates, Ammonia, Nitrates, Chemical Oxygen Demand (COD), Sodium, Potassium, Magnesium and Bacterial Indicators (Faecal Streptococci, Clostridium, Pseudomonas Aeruginosa)

Our overall knowledge of time and the amount of contamination leached from decomposing bodies and coffins, which make their way into the soil and ground water is limited. This would suggest that all precautions which may reduce the risk of exposing cemetery operatives and the public to these harmful pollutants should be mandatory. This is the function of the Environmental Remediation Formula (ERF)

Documentation has been compiled by University of Ulster and Queens University Belfast regarding the successfull neutralisation testing of Formaldehyde, the initial carcinogenic pollutant leached from decomposing bodies.